An introduction to Sect : astrology


Sect is a fundamental concept in astrological tradition. Despite its importance, it got lost in transmission. For some reason, sect never found itself in modern astrology. Rulerships transferred, but sect did not. Most people who get into astrology are unaware of what sect means. Sect comes from the latin noun secta, meaning “a way, a road.” Sect is division. Sect creates groups. In astrology, sect refers to the division of planets and signs into the polarities of diurnal (day) and nocturnal (night). Studying traditional astrology, you may hear “day sect” “night sect.”

Each sect includes a luminary planet (Sun, Moon), a benefic planet (Jupiter, Venus), and a malefic planet (Saturn, Mars). Sect was important to traditional astrology because it implored which planets would be helpful and destructive to the individual’s fate and fortune.

We are “born” into a sect depending on the position of the Sun in our natal chart. You may hear someone has a day chart, or a night chart and that is referring to sect. A day chart means that you were born during the day so the Sun is placed above the ASC/DSC axis which is the horizon line. A night chart means you were born during the night so the Sun is placed below the ASC/DSC axis. If you were born close to sunrise or sunset, you have to look at whether your Sun is above or below your ASC/DSC degree. Knowing whether you are a day or night chart, allows you to understand which planets are working for you and which planets are working against you or not quite tapped into. On an episode of the strology show, astrologer Jason Holley viewed sect as two streams of consciousness. Some of us may be tapped into a more diurnal consciousness while others are tapped into a more nocturnal consciousness.

The Day sect emphasizes the importance of a target and public relations. The sky during the day only includes one pervasive light: the Sun. Our sight is more clear so day charts tend to be more outward or seen by the public. These are people who are goal oriented. These are people who may be devoted to one particular thing. Depending on other factors, these people may have an easier time assimilating into expectations. The Day sect includes planets Sun, Jupiter, and Saturn, which all have a role in society-building. They are rational focused. They are the laws of society. They are the public.

The Night sect emphasizes our relationality. The sky during the night, unlike the day, includes multitudes of stars and the shifting force of the Moon. There isn’t just one light in the sky at this point. Thus, the night sect considers multiplicity and interrelatedness. We are connected but in complicated ways. Sight at night is compromised. Things aren’t clear so it requires us to go deeper and perhaps, in uncomfortable ways. These are people who may not be readily seen by others. These are people who have roles or jobs that are otherwise behind the scenes or even outlawed. These are people whose connections are most defining. The Night sect includes planets Moon, Venus, and Mars, which all have a role in our relationships. They are planets that are not rational focused. They handle topics that are complicated and exist in multitudes. The Moon governs our emotions and reactions. Venus governs our desires. Mars governs our anger. These are all subjects that are not easily explainable. These are all subjects that require us to go through them and experience it in order for it to be transplanted as knowledge. These subjects can also be compromised through our relationships.

Let’s look at an example: 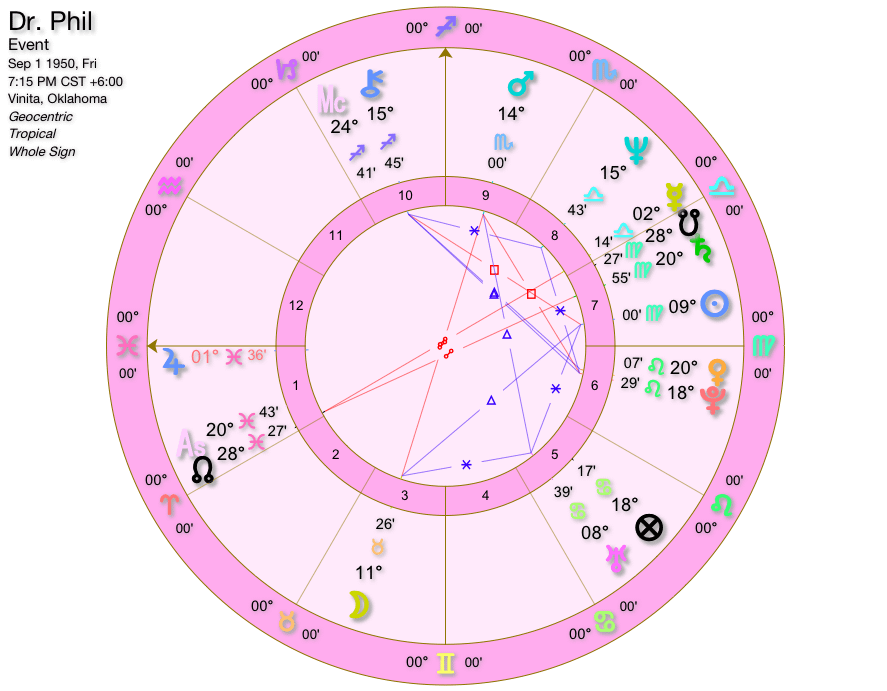 So I decided to be sadistic and chose Dr. Phil. Dr. Phil was born September 1st 1970 at 7:15pm. He was born close to sunset so we have to look whether his Sun is above or below the degree of his descendant. His Sun is at 9 degrees of Virgo and his descendant is at 20 degrees of Virgo–the Sun is below the descendant so he has a night chart. His sect of light is the Moon at 11 degrees of Taurus, his benefic of sect is Venus at 20 degrees of Leo, and his malefic of sect is at 14 degrees of Scorpio. His career (while it is VERY fraudulent, which we will get into in a minute), is focused on relationships. His show is about the fall of relationships or relationships that handle serious matters (such as abuse or addiction) which is indicated by his benefic of sect, Venus conjunct Pluto in Leo. Although, being a night chart there is much to him that is kept under wraps. His malefic out of sect is Saturn in 20 degrees of Virgo, exactly opposite of his Ascendant in Pisces. There will be a lot of controversy and even a debilitating lawsuit that will be underway if not this year with the nodes in Gemini and Sagittarius, then closer to Saturn’s entry into Pisces in 2023. Why it will be very debilitating is that Saturn is his malefic out of sect, meaning Saturn poses the most harm especially activated by an opposition to the upcoming Saturn in Pisces transit. His malefic of sect is Mars in 13 degrees of Scorpio in the 8th house. No doubt this man has been able to overcome any suspicion over the years. He probably committed a fair amount of tax evasion given the 8th house signification. But given he’s a night chart, Mars doesn’t become an enemy in his chart. His benefic out of sect is Jupiter retrograde in 1 degree of Pisces in the 1st house. Jupiter is also the ruler of the 10th house where his Midheaven is located. Most of us, at one time, perceived Dr. Phil to help others and remedy, which speaks to his Jupiter in Pisces. Although, his Jupiter is benefic out of sect so this materializes as fraudulence.

The Curious Case of Mercury

As always, Mercury is a curious case. Mercury has no set allegiance to either sect; although, it can be determined by its position with the Sun. If Mercury is rising above the Sun then it is part of the day sect. If Mercury is rising below the Sun it is part of the night sect. Mercury in a night chart may be more comfortable with writing or contemplative with speech and can be more deceptive (ahem, secrets!). Mercury in a day chart may be more comfortable with teaching or public speaking, and their opinions may be more regarded or sought out by the public.

What is the most dominant planet in your chart, and how does it affect you? :…

How would you figure out your chart if you were born on a plane over the ocean?…

The Meaning of the Sun in Astrology : astrology