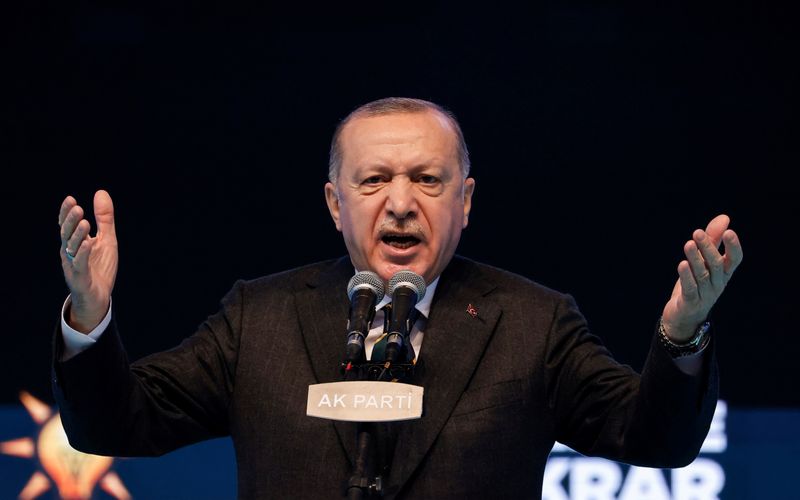 Wall Street banks JPMorgan (NYSE:), Goldman Sachs (NYSE:) and Citigroup (NYSE:) all ratcheted up inflation forecasts after the lira plunged 12% in response to the ousting of Naci Agbal, a hawk. He was replaced by Sahap Kavcioglu, who is expected to soon cut interest rates.

For import-reliant Turkey, a weaker currency raises consumer and commodities prices, boosting inflation, which has been stuck at double-digit rates for years and edged above 16% last month.

Economists say it will now peak at as high as 18% in April or May, and could head higher, derailing earlier expectations for a gradual monetary easing cycle late in the year and gross domestic product growth as high as 6% in 2021.

“Recent events have clearly shot investor confidence in the country to pieces,” said Jason Tuvey, senior EM economist at Capital Economics, who slashed economic growth forecasts to 4.8% from 6.8% before Agbal was fired and could cut more.

In the week after Agbal’s abrupt dismissal on March 20, foreign investors dumped some $1.9 billion worth of Turkish assets, the biggest drop in 15 years, according to bank MUFG.

Kavcioglu had previously criticised Agbal’s rate hikes to 19% and said high rates cause inflation – an unorthodox view shared by Erdogan. Since taking the job, he has shifted and said tight policy is needed for now, given high inflation.

In the first glimpse of how the lira rout lifted inflation, consumer prices rose more than expected in March to its highest since mid-2019, while producer prices surged beyond 31%.

Serkan Gonencler, economist at Gedik Yatirim in Istanbul, said the lira selloff meant inflation could touch 18% in May, versus his previous forecast of a 17% peak in April, and remain close to 17% in the months ahead.

“With such an inflation outlook it would be a tough call … as to when to initiate a gradual rate-cut cycle,” Gonencler said.

A Reuters poll on Wednesday showed a first rate cut is expected in the second or third quarter, earlier than in a poll conducted before Agbal was fired.

Cheap credit from state banks helped Turkey’s economy grow 1.8% last year despite pandemic fallout, well ahead of most peers. But its potential growth rate is around 5%, and Erdogan on Wednesday again called for single-digit rates.

“The main risk to our forecasts is that the authorities may push for growth with premature rate cuts or an increase in lending,” said Goldman Sachs, which cut 2021 growth forecasts to 3.5% from 5.5% before the central bank overhaul.

Erdogan has sacked three central bank chiefs in less than two years, partly for not following policy instructions. During Agbal’s four-month term – in which the lira rallied as much as 24% – he raised the policy rate by 875 basis points to 19% and expected inflation to hit a 5% target by the end of 2023.

Colorectal Cancer Is Affecting Younger People. When Should You Get Screening?

6 Principles for Navigating Challenges in Life

The New U.S. Climate Normals Are Here. What Do They Tell Us…