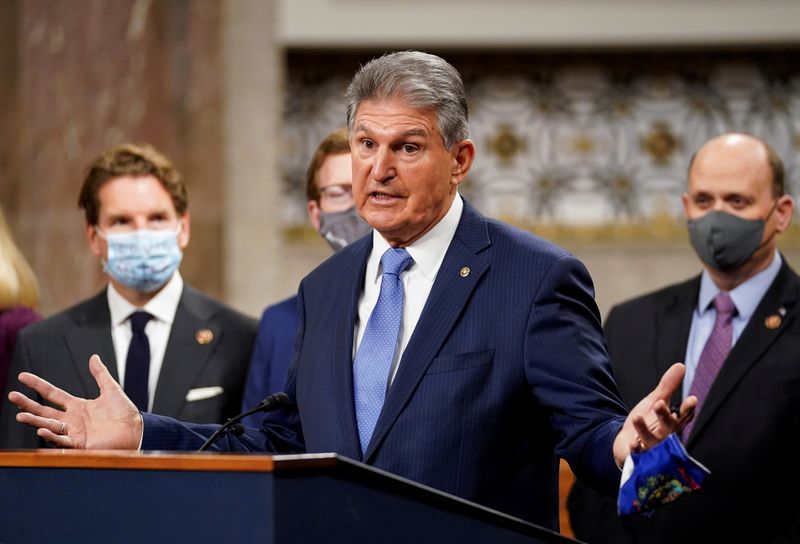 WASHINGTON (Reuters) – U.S. Senator Joe Manchin said on Monday he supports a sweeping labor reform bill, giving the legislation some momentum after it passed in the House last month.

The West Virginia Democrat said the Protecting the Right to Organize Act, or PRO Act, would level the playing field for unions and he was looking forward to working with a bipartisan group of legislators to pass it. He made the announcement at a virtual National Press Club event with Cecil Roberts, the president of the United Mine Workers of America union.

The bill, introduced in February by Democratic Senator Patty Murray and supported by President Joe Biden, would bolster collective bargaining rights, allow unions to collect dues from non-members covered by their contracts, and establish penalties for corporations that violate workers’ rights, among other measures.

Roberts said passage of the legislation would go a long way to help recovery across Appalachia, which has been hit hard by the transformation of the energy businesses from coal to renewable energy. U.S. coal production has sunk to the lowest levels since the 1970s and jobs in the industry have plummeted more than 40% since 2008.

The bill passed in the House 225 to 206 but has an uphill battle in the Senate. Even with Manchin’s support the bill does not yet have all 50 Democrats in the 100-member Senate, the level at which Senate Majority Leader Chuck Schumer said it would get a vote.

Backers of the bill would also have to get the support of Democratic Senators Mark Warner, Kyrsten Sinema and Mark Kelly, who have all expressed some level of skepticism.

Manchin did not say, when asked, whether he supports a Clean Energy Standard (CES) as proposed in Biden’s $2.3 trillion infrastructure package. A CES would set gradually rising targets for the power industry to cut emissions until they hit net-zero, with by adopting wind and solar power, using existing nuclear energy, or capturing carbon from coal and plants. But Manchin reiterated support for carbon capture. “We can do so much more, we can eliminate the … greenhouse gases,” he said about the technology.

We Need More Disabled Hands in Ads and Magazines

Marketing Abraham Lincoln to the Masses

How to Unlock an Extra Life with the Astronaut Figurine…