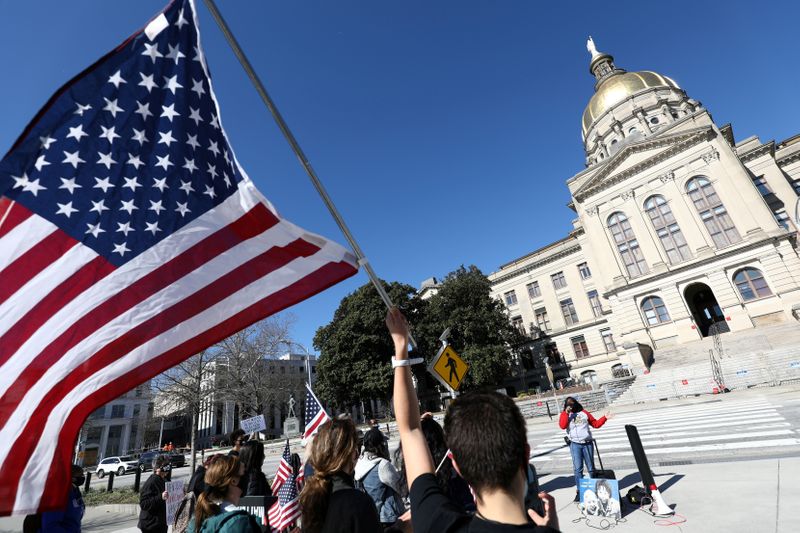 CHICAGO (Reuters) – Airlines are bracing for challenges to tax breaks they receive from U.S. states as a result of wading in to a political debate over voting rights, rekindling a domestic tug of war between politics and profits.

A Republican backlash faced by Delta Air Lines (NYSE:) in its home state of Georgia after it called new restrictions unacceptable is spreading to Texas as some corporations clash with Republican lawmakers there.

Democrats say the tighter regulations are undemocratic and will hurt Black voters in particular.

American Airlines (NASDAQ:) and United Airlines have spoken out against measures that restrict voting access, sparking a furious response from Republicans who say the bills counter fraud.

Now airlines are concerned that tax breaks that allow them to reduce fuel costs could be singled out by lawmakers in Texas in retaliation for opposition to new voting laws, people familiar with their thinking said.

“We have an eye on that as  a possibility and I think it goes without saying that we wouldn’t like that,” one person said, asking not to be identified.

On Tuesday, Texas Lieutenant Governor Dan Patrick ripped companies for opposing the bill and accused American’s chief executive of failing to read it, something the airline denied.

The clashes shed new light on the reliance of some U.S. carriers on state tax breaks to shave their fuel costs, airlines’ second-largest expense after labor and one that weighs on razor-thin profit margins.

“There’s one thing that you consume a lot of in the airline business and that is fuel,” said U.S. airline analyst Bob Mann.

“So they spend a lot of time trying to avoid taxation or eliminate taxation where they can. It’s a competitive weapon.”

Airport and fuel costs can influence airlines’ decisions on where to add flights, and most states “really want more air service, not less,” an executive at a small U.S. airline said.

It is not the first time airlines have seen tax breaks fall under the microscope after they became involved in political topics.

In 2018, Georgia temporarily struck down a tax exemption after Delta ended its relationship with the National Rifle Association following a school shooting in Parkland, Florida.

The exemption would have saved Delta $40 million a year, a small sum compared with its $9 billion total fuel bill but enough to impact marginal routes. Eventually it won the tax break.

Delta is the largest employer in Georgia and its Atlanta hub generates significant revenue for the state.

North Carolina threatened to repeal a fuel tax exemption for American Airlines, with a hub in Charlotte, after it opposed a state law on transgender bathrooms, but ultimately backed down.

As hot-button national issues have gained force after the Trump presidency, business calculations are shifting.

Leaders of large U.S. airlines have decided that taking decisive stands on issues like civil rights is increasingly important to protecting their brand and appeasing employees and customers, the sources said.

For now, that overshadows concerns about whether those decisions could imperil items like tax breaks, they added.

Prolonged attention to tax breaks could, however, reopen wounds between U.S. carriers and rivals over what constitutes unfair aid.

In 2015, Delta, American and United – the so-called Big 3 – accused Gulf airlines of benefiting from $42 billion in public subsidies including fuel hedging concessions and tax policies.

“Airlines are not immune from two-headed behavior. They decry government involvement in anything until it’s something that benefits them, at which point they’re all for it,” said Mann.

“Talking about state-subsidized airlines versus some tax exemptions is much different in size and scope than whether or not a particular state chooses to tax jet fuel,” one said.

U.S. airlines have struggled to act in unison on either the earlier trade dispute or the recent domestic political conflict.

That adds a layer of complexity in Texas, where analysts say it would be difficult for lawmakers to punish the Big 3 without also harming Southwest Airlines (NYSE:) Co, which has not directly opposed the voting bills.

“Southwest’s biggest imperative right now is to win customers and survive the pandemic without alienating 50% of the population,” one person familiar with its thinking said.

How a Carnivorous Mushroom Poisons Its Prey

Do Solar Panels Need Cleaning & Maintenance? The What, How, How Often, When, & Why

Dogecoin at $0.44 embraces ‘literal moon’ ahead of Elon Musk SpaceX…

Biden meets lawmakers, including Republican who tried to block election, on…

BMW’s M3 and M4 getting all-wheel drive in August

Can we reflect sunlight to fight climate change? Scientists…